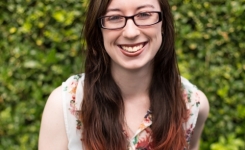 Alayna Cole is the founder of Queerly Represent Me, a research organisation and database of games featuring queer representation. She is a lecturer in Serious games and a doctoral candidate in Creative Arts (Creative Writing) at the University of the Sunshine Coast. She founded Horned Llama Studio in 2016, and also works on game titles independently. She has broad research interests, but is primarily focused on created and analysing texts and audiences with the goal of improving diverse representation, particularly of gender and sexuality.

Increased representation of queer relationships in videogames can lead to further freedom regarding who player-characters can pursuit romantically; however, allowing a player-character to date a selection of NPCs regardless of that player-character's gender does not effectively improve diverse representation of varied sexualities. In this model, NPCs become 'playersexual', meaning that they will date the player regardless of traits such as gender, appearance, or personality, and this causes characterisation to be shallow and attempts to represent plurisexuality to be superficial. In this talk, I will discuss games that created playersexual NPCs, as well as titles that effectively combat this issue through their character design choices, with the hope of revealing the subtle differences between playersexual and truly plurisexual NPCs, while also inspiring game designers to create more meaningful characters.