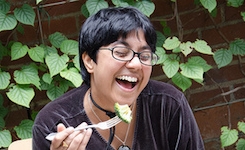 Note: this has been edited of some of it's original content. See Sumana's explanation here.

Portland, OR June 27, 2015
Stand-up comedy that doesn't hurt
I may joke *about* sexism, classism, racism, and other -isms, including quoting microaggressions (with no slurs). I offer to provide the text of my comedy to AlterConf organizers about a month ahead of time, if requested, to check for anything unacceptable or discuss content warnings.

Sumana Harihareswara performs stand-up comedy that assumes you're smart. You'll laugh about the absurdities of capitalism, everyday microaggressions, and HOW DO I PEOPLE. If you've shied away from mainstream comedy because it's so often marginalizing and oppressive, you'll enjoy these observations about:
* why refusing to use Facebook is like being a vegan
* public transit and social disasters
* going through airport security while brown
* the peculiar hazards of consulting in open source, from LibreOffice templates to Richard Stallman
* and more.