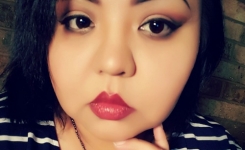 Known as the Brown Ball of Fury, Johnnie Jae is a profoundly driven and unstoppable Indigenerd from the Otoe-Missouria and Choctaw tribes of Oklahoma. She is a writer, speaker, technologist, advocate, community builder and entrepreneur that loves empowering others to follow their passions and create for healing and positive change in the world.

Currently, she is the founder and CEO of A Tribe Called Geek, an emerging multimedia company that is dedicated to showcasing and encouraging Indigenous contributions to geek & pop culture as well as STEM fields. Jae, also, co-hosts the ATCG name sake podcast with Jackie Malstrom aka Jack the Pima, where they often discuss native representation or the lack thereof in mainstream geekery with fellow Indigenerds from across Turtle Island.

In addition to her entrepreneurial pursuits, Jae is an advocate for many Indigenous and human rights issues, mainly focusing on youth empowerment, suicide prevention, gender & racial equity, violence towards Indigenous people, human trafficking, police brutality, reconciliation & solidarity, and Indigenous representation in the media.

She is a Founding Board Member of Not Your Mascots and LiveIndigenousOK, She is also a member of the Women Warriors Work Collective.

Her ability to seamlessly shift from humor and pop culture to advocacy and business has made her a much-sought after speaker, panelist, and commentator. She has taught numerous workshops that address suicide awareness & prevention, mascots & stereotypes, digital activism, Indigenous journalism & media, and the utilization of social & digital media for business and activism. Her work has been discussed in many media outlets, such as Indian Country Today, ATPN, CBC, USA Today, Women’s E-News, Takepart.com and Upworthy. She has been a guest on several radio shows and podcasts, including Native America Calling, Native Trailblazers, Black Girl Nerds, BBC World Have Your Say and ICI Radio.

Social Media has awakened a revolution of empowerment within Native Communities. It has allowed us the opportunity to raise our voices and develop a system of resistance based on ancestral knowledge and tech know-how to communicate with each other and the world beyond our Native nations. Every voice creates a spark and with every spark we grow the flames of change for this generation and the next.