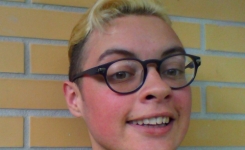 Scar is a long-time feminist activist. From informal feminist collectives to Planned-Parenthood NGOs, he has since achieved a master's degree in Gender Studies and Discriminations and authored a memoir about feminism on the Internet, social networks and Tumblr in particular.
He is now very active on Twitter about inclusivity in the hackerspace and free-software backgrounds, as well as general gender issues.

Paris, France July 9, 2016
Inclusivity in the hacker background : where we are, where we've come from and where to go
Sexism, transphobia, sexual violence, rape.

This talk will be about inclusivity in hackerspaces and the struggle-against-surveillance background, and how to deal with situations of systemic sexism, sexual violence and gender-minorities exclusion in such backgrounds. We will discuss about the specific problem of sexism and gender-exclusion, the initiatives that have taken place already, the general response, and how to carry out improvements in order to make tech- and hacker-spaces more friendly towards women and gender minorities.