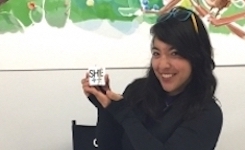 Lizzie is a junior Computer Science major and undergraduate CS Teaching Assistant at Bryn Mawr College. This summer, she was a developer evangelist intern with PubNub in SF, where she developed and blogged about iOS, Android, and web apps she made to showcase their APIs and SDKs. She also gave talks at Google SF and Square, and has given workshops on web development and how to build apps with PubNub and Clarifai. She enjoys running, Zumba, Hamilton, and all things Disney. You can find her on Twitter @lizziepika.

Though both diversity and inclusion are important, it's not enough to be in the room where it happens (which is like diversity)--you want both the Adams Administration as well as Washington on your side, which is like inclusion. The latter breeds the former because even on a diverse team, you could still be uncomfortable and helpless.

Though I grew up in Silicon Valley as a non-STEM person, I am here today as a computer science student and developer advocado because of diversity initiatives. After attending and speaking at tech meetups and conferences on both American coasts, I realize now that companies should initially focus on inclusivity, which will in turn lead to diversity. I realize now that the diversity initiatives were successful because of the empowering and supportive atmosphere, and that that same atmosphere is also obtained through inclusion (and not necessarily diversity.)

So what's the difference between the two? Don't wait for it--I will use Hamilton lyrics to go over similarities, differences, and the importance of both.