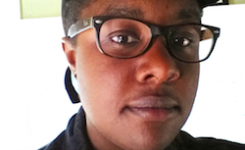 Morgen Bromell is a 25 year old black queer technologist and CEO and founder of Thurst, a dating app for queer people of all genders. Thurst aims to create a space for marginalized people, especially trans women, to connect with community and find love. Morgen is working towards make tech more accessible to people of color through software and community initiatives and activism. They are interested in science fiction, afro-futurism, comics, and vegan donuts.

I founded a dating app called Thurst, launched a beta in 2017. I shut that same beta down a few months later because of overwhelming threats and harassment to the small, but dedicated user base of 15,000. I realized that many social platforms and dating apps lacked an adequate let alone radical protocol for keeping users, particularly marginalized users safe. I've been developing a way to address harassment, abuse, and name and detect patterns of violence on platforms. Most platforms, apps, and online spaces are inherently hierarchical and therefore inherently stratified in terms of privilege, access, safety, and usability. My talk will talk about a few practices, paradigms, and tools my team and I use to better understand how to reduce harassment and violence.