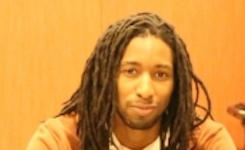 twitter site
Marvin is a native of Atlanta, GA and a first-generation college student studying Computer Science at Morehouse College. Aligning his interests towards scientific computing, He has participated in many programs aiming to increase minority participation in the field. To name a few: the FACES Scholars Program (sponsored by Georgia Tech and Emory University), the XSEDE Scholars Program (Rice University and the Tapia Center for Excellence and Equity), and the Broader Engagement Program (HPC Interconnections track of Supercomputing Conference). He wishes to pursue a Ph.D. after earning his undergraduate degree. Marvin hopes to be just one of many of an influx of minorities into computing and other scientific fields in the coming years. To help affect this change He plans to start a non-profit that aims to generate youth interest in technical fields by getting them involved early.
Atlanta, GA February 28, 2015
Low MISC: Why encouraging Minority Involvement in Scientific Computing is a Good Idea
The need for increased participation from under-represented minorities in Science, Technology, Engineering and Mathematics (STEM) fields has been extensively documented. For example, The National Academies of Science report “Rising Above the Gathering Storm: Energizing America for a Brighter Economic Future“ tells of the the importance of increasing the workforce of science and engineering professionals. However, with the United States minority population growing, it is becoming a challenge to increase the number of underrepresented minorities in science and engineering fields, including computing. Analysis of data from the yearly Taulbee Survey – which documents enrollment statistics from CS departments across the nation – shows a trend of decreasing enrollment in Computer Science for African-Americans from the Baccalaureate to the Masters and Doctoral level. This talk will further discuss the phenomenon and why it should even be a concern.